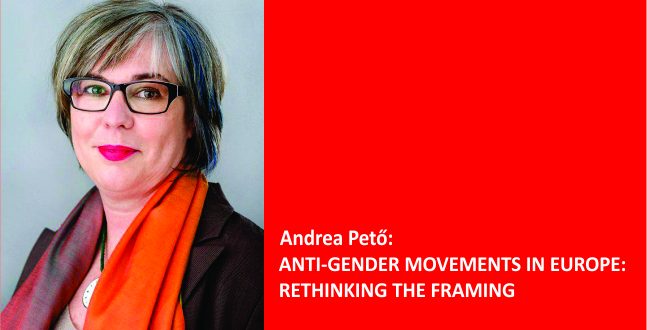 ISSH-S is glad to announce that following our signing an Erasmus+ agreement with the Department of Gender Studies at Central European University, we will be hosting the distinguished historian and gender scholar from CEU Prof. Andrea Pető. Prof. Pető will be in Skopje to teach and work with ISSH-S students. She will deliver a lecture titled “Anti-gender Movements in Europe: Rethinking the Framing.”. The lecture will be held on 22nd of June / 18 pm.at the Institute of Social Sciences and Humanities – Skopje. Please find more information below.

The talk is analyzing the state of anti-gender movements in Europe, assessing the impacts of counter strategies by progressive actors. It argues that anti-gender movements are a new phenomenon in European politics which require new methods to react from progressive forces. If progressive politics forgets its value innovative grass-root origins, then only using the already invented gender equality policy measures will not prevent this new phenomenon to prevail in the long run.

Andrea Pető born in 1964 is Professor in the Department of Gender Studies at Central European University, Budapest, Hungary and a Doctor of Science of the Hungarian Academy of Sciences. She is teaching courses on European comparative social and gender history, gender and politics, women’s movements, qualitative methods, oral history, and the Holocaust. Author of 5 monographs, editor of 31 volumes, as well as 261 articles and chapters in books published in seventeen languages. Her articles have appeared in leading journals including East European Politics and Society, Feminist Theory, NORA, Journal of Women’s History, European Journal of Women’s Studies, Clio, Baltic Worlds, European Politics and Society, International Women’s Studies Forum.

She is on the editorial board of 6 international and 2 Hungarian academic journals. She also serves as an associate editor for The European Journal of Women’s Studies.

She has also been a guest professor at the universities of Toronto, Buenos Aires, Novi Sad, Stockholm and Frankfurt.

She is author, with Ildikó Barna, of Political Justice in Budapest after WWII (2015) and co-editor, with Ayşe Gül Altınay, of Gendered Wars, Gendered Memories: Feminist Conversation on War, Genocide and Political Violence (2016) and edited the volume on War in the Interdisciplinary Handbook: Gender series (Macmillan, 2017).

She has an extensive list of publications in internationally renowned e-journals as OpenDemocracy, Queries, Social Europe, Political Critique, Conversations, The Huffington Post, Der Standard and on popular blogs in Hungarian as Galamus, Dinamo, Kettős Mérce, Mandiner contributing to the discussion on progressive politics.